I had just left Bed Bath & Beyond, excited, because I had just bought this new pizza pan and rolling pin. Tonight was going to be pizza night done right! Leaving the parking lot, I come to a stop sign, and crossing in front of me is my father. I roll down my window, and yell “ Hi Dad”. He looks right at me, says “Hey” then turns around and walks in the opposite direction.

I sat there for a second – shocked. I contemplated turning left to follow him, but in that split decision I turned right and headed home. I felt hurt. I don’t think he actually recognized who I was, or at least that’s what I’m telling myself because the alternative is, he knew who I was and walked away from me. He was only feet from me, there’s no way he didn’t get a clear look at me and I said ‘Hi Dad’, not ‘Hi Tom’. Was my face one of a stranger to him?

Outside of our immediate family, no one really talks about my father. When I got married my in-laws didn’t bring it up, and no one pressed or questioned why he wasn’t there. It’s not that I didn’t want my father there. It’s not that I don’t want him in my life, but unfortunately he’s not the man we once knew. Growing up, there were always issues, but I admit there were good times too. It wasn’t 100% bad, until one day it was.

I was born in 1986; both my parents were 18 at the time. My father’s upbringing was a difficult one and one I believe he genuinely didn’t want that for us. His father had left him and his 6 sibling to be raised by my grandmother. I’m sure she was doing the best she could, but they didn’t have much and honestly it sounded like they were just trying to survive. It was a rocky start, them being so young, and life what it was – then having me. From an early age I recall spending a lot of time with my grandparents. I remember my father being sent to jail and us living in a shelter until they placed us in housing. And I remember Kelley pulling the fire alarm in that shelter and getting in trouble. You know, despite what was happening I never felt not cared for or like I was missing out on anything at this time. It felt like a normal family upbringing for me. 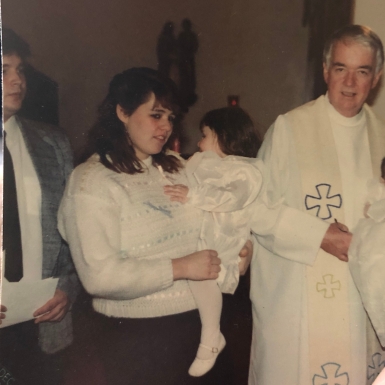 When I was in first grade my mother moved myself and 2 sisters to Medford. We were living in a housing development (aka the projects) and my father joined us after his prison sentence was over. Back then, I actually had no idea why he went away, but later I was told he was selling drugs. Which come to think of it, makes sense, because I remember spying on him as a little girl, after being banished to my room. He’d use the cover to our games to baggy his weed or roll joints with his friends. As a naive little girl, I really didn’t think anything of it back then.

He was tough on me from the start, but in a different way than he was to my sisters. He was overprotective and always pushing me. I wasn’t allowed to go places with my friends, I wasn’t allowed to date, or wear certain clothes. I was being pushed towards sports, which I had no interest in. He wanted me to be a tomboy, which wasn’t something I was into. Some of this sounds normal, sure, but here’s the thing, when you didn’t do as he requested or fought him on anything – you were greeted with anger. You didn’t get him a beer from the fridge? You talked back? You didn’t obey him in general? Well, then you might be looking at a shoe thrown at you or a full on spanking. He’d remind you “I brought you into this world, and I can take you out.” I learned quickly to keep to myself, locking myself in my room, avoiding as much conflict as possible. My sisters on the other hand didn’t do the same, and always stood up for themselves or each other, which meant a lot more physical abuse than I endured. I had this closet, and we had put a bureau in it, and I would wedge myself inside the closet next to bureau, pulling it close to me so no one could easily get to me. I’d hide in there when he was angry. I’d cry in there when my sisters were being spanked. I’d just go in there to get away.

And yet, he had another side of him, which was good. People liked him, he was social, he was involved, he was generous. We always had big elaborate Christmas’s, the house decorated, inside and out. We’d cut down our tree, always picking one that was way too big for our space. And on Christmas morning, Santa would fill the space with presents and he’d record us opening them. We’d spend our summers camping; some of our best childhood memories are there. He went to the school when there were issues, he took me to class on my first day. Heck, he talked to me when I got my first period. We never went without food or clothing or what we truly needed. I genuinely believe he was trying to give us what he didn’t have, and he succeeded in that.

When I was 16 years old, things started to change, I think stemming from my parents separating. My mother had left my father, but we didn’t blame her for that. He was just as abusive to her as he was to us. By this time, I was out doing my own thing, and I don’t remember what was going on inside the house to be honest. My father did not take this separation well though and I’d say the family really started to fall apart during this time. We all bounced home to home over the years, trying to find a new normalcy, trying to make it work, but it never felt normal after that. My father eventually married, but she didn’t want anything to do with us. We were the furthest apart as a family, as I ever remember being. As the years continue, my mother and father both ended up in this downward spiral of abusing drugs and we eventually all went our separate ways. We were just kids, we didn’t know how to handle this.

In the beginning of the drug use, we kept giving my father more and more chances. It’s almost like we wanted what we once had back, because this was so much worse. He’d lie and say he was clean, but it’s clear he wasn’t. He was horrible to us verbally. It’s like the drugs amplified the bad parts of him. He was withering away in front of us. Physically. Mentally. Withering away. Over the years, we each stopped seeing him when we each hit our own breaking point. I’d receive an occasional Facebook message, which was completely incoherent or aggressive and attacking me for not caring for him in his time of need.

It was hard. It still is.

Last year my Uncle Joe passed away, my father’s brother. It was the first time in maybe 10 years, that we would all be in the same room together. Even my mother, who is now doing well, came up from FL to help support us. Seeing my father. Trying to talk to him. He just wasn’t the person he once was. He barely spoke to any of us, even when we tried to talk with him. 20 years ago he would have been reminiscing, and talking with everyone there. 20 years ago, he would of appreciated all the camping photos, and would of been a bigger support system for my cousin. 20 years ago, you would of felt the emotion going through him during this difficult time. But now – He’s a shell of what he once was. He’s gone.